WHAT IS ARTIST TO ARTIST?

Operation Triple Threat's Artist to Artist Workshops is a series of training and capacity building workshops for performing artists.

REGISTER HERE: 2021 Artist to Artist Registration Form
PAYMENT: When you submit this form, Instructions on how to make your payment will be emailed to the email address provided. Your spot(s) is/are NOT guaranteed until you have made a payment have received payment confirmation. 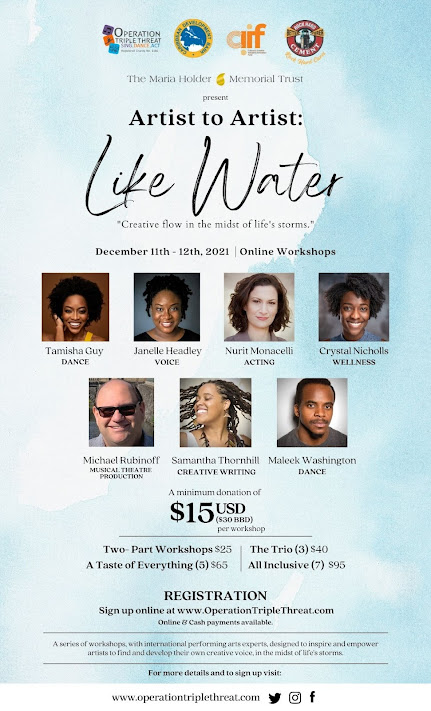 REGISTER HERE: 2021 Artist to Artist Registration Form
PAYMENT: When you submit this form, Instructions on how to make your payment will be emailed to the email address provided above within 24-48 hrs. Your spot(s) is/are NOT guaranteed until you have made a payment have received payment confirmation. 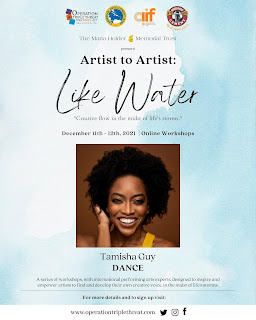 Tamisha A. Guy, a native of Trinidad and Tobago, began her formal dance training at Ballet Tech, under the direction of Eliot Feld. Later she attended Fiorello H. LaGuardia High School, and SUNY Purchase College as a double major in dance and arts management. In 2013 Guy graduated with honors from SUNY Purchase College and joined the Martha Graham Dance Company shortly after. In 2016 Guy was selected as one of Dance Magazine' Top 25 to Watch and she also received the 2016 Princess Grace Award. In 2017, she was named one of the Best Dancer's of the Year by Dance Europe. In 2021, she received the 2022 Vilcek Prize for Creative Promise in Dance. Tamisha currently dances with A.I.M, under Artistic Direction of Kyle Abraham, and she is a current Lecturer in Dance at Barnard College. 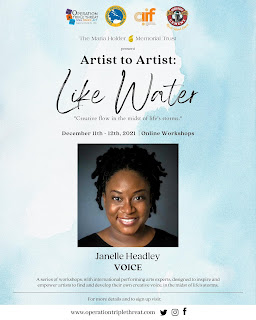 As a young girl, on the island of Barbados, Janelle Headley would grab every opportunity to be involved in the arts. Whether it was singing, dancing, acting, painting or drawing, Janelle was always there, in the thick of things, creating. For her this was ‘home’ —the best way she could express herself. Upon graduation from York University, with a Bachelor of Fine Arts Specialised Honours Degree in Music, Janelle performed at numerous events including the Barbados Jazz Festival and the TD Toronto Jazz Festival. In addition to performing, Janelle has always been passionate about performing arts education. Her desire is for everyone to experience the joy of actively participating in the arts. In 2005 she founded Live the Music! Breathe the Music©, a company dedicated to offering superior training to aspiring vocalists and musicians by way of private lessons and workshops. Six years after launching Live-Breathe Music! Janelle incorporated dance and theatre through Operation Triple Threat: Sing. Dance. Act. Janelle Headley’s goal is to use the performing arts to inspire, to question and to catalyse change. She believes that the message is as critical as the medium, and hopes that, through the opportunities she provides, she can help other artists to be the best they can be. 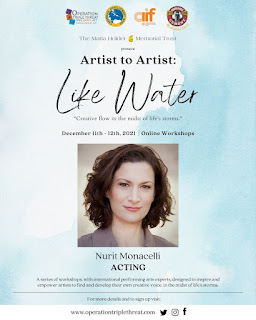 Nurit Monacelli is an actor and teaching artist, living in NYC.
Nurit Monacelli's Film and TV credits include Darren Aronofsky’s Noah, Norman (starring Richard Gere), and guest appearances on Manifest, Blacklist, Person of Interest, Inventing Anna, Dietland, and Law and Order, Criminal Intent. She has had leading roles in award winning independent films that have circulated nationally in over 20 festivals. In NY, she has appeared Off and Off-Off Broadway at such places as Lincoln Center, New Georges, The Drama League, The Culture Project and the Flea. Regional/International credits include ART, Shakespeare Theatre of NJ, NY Stage and Film, the Andrews Lane Theatre in Dublin and the Moscow Art Theatre. Nurit teaches Acting, Auditioning for Film and Theater, Script Analysis and Movement for the Actor at the American Academy of Dramatic Arts. She has also taught acting at NYU (Playwrights Horizons), NY Stage and Film and Montclair Sate University. She coaches professional actors in NYC. 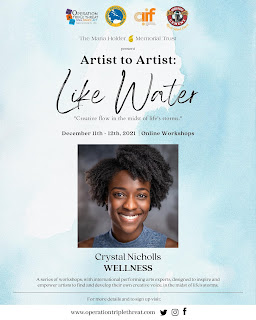 Originally from Barbados, Crystal Nicholls is a professional dancer based in London. She obtained her BFA in Performance Dance from Ryerson University in 2012. Since then she has performed on the high seas as a mainstage dancer with Princess Cruises, and has appeared in commercials such as Virgin Mobile's "Random Acts of Love" and Sunnybrook hospital's "Innovation when it matters most." She has performed in Disney's The Lion King as an ensemble dancer and Sarabi cover from 2014 until 2020. In addition to being a performer, Crystal is also a nutrition coach and holistic health specialist, certified by the Institute of Transformational Nutrition. Through her 1:1 program and group workshops, she helps other performers and creatives boost their energy, overcome creative blocks, and embody confidence. 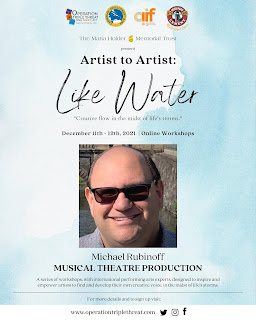 A Toronto based producer and lawyer who conceived the idea to share the compelling events depicted in Come From Away as a musical. In 2011 he established the Canadian Music Theatre Project, an incubator for the development of new musicals, where he produced and developed the first workshops of Come From Away, The Theory of Relativity and 28 other musicals. He is a producer and the creative consultant for Come From Away’s five companies around the world and received the Olivier Award and a Tony Award nomination for Best New Musical for the show. He is producing the new musical Grow, which will have its world premiere at London. Ontario's Grand Theatre in April, 2022. He continues the development of new musicals at home and abroad. He was awarded the Meritorious Service Cross by the Governor General of Canada for his role in creating Come From Away. A proud graduate of Western University Law. 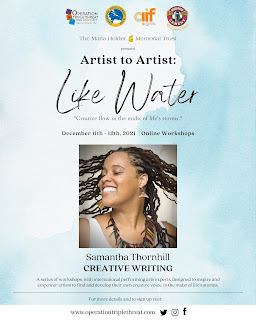 Samantha Thornhill is a poet, educator and children's author from Trinidad & Tobago. After immigrating to the United States at a young age, she became introduced to writing poetry at age 12 when her English teacher assigned a poem for homework. Since then, Samantha became the editor of her high school's literary magazine and went on to pursue her degrees and career in writing. Her work has been widely published, and she has traveled throughout the United States, as well as Africa and Europe to share her engaging poems with audiences of all kinds. She has written 10 children's books. Her poetry book, The Animated Universe, is being published next year by Peepal Tree Press. You can learn more about Samantha at samanthaspeaks.com. 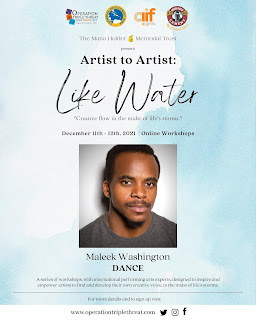 A native New Yorker Maleek Washington is a performer, choreographer, and teaching artist at Broadway Dance Center. Previously Maleek has worked with Sia, Kyle Abraham, Rihanna, ASAP Rocky and currently a collaborator with Camille A Brown and Dancers. While also creating an extensive career as a teaching artist Washington has taught at Joffrey jazz and contemporary, Boston conservatory, LaGuardia Highschool for performing arts, Bard College, Move NYC, and NYU Tisch to name a few. With multidisciplinary, experiential performance works that investigate the people, practices, and spaces shaping Washington's black identity, he is proud to present his art in 2017 at the Boston Dance Festival, Pepatian and BAAD!, Periapsis Dance and Music Noesis, and at the legendary Movement Research at Judson Church in Spring 2018. Washington is also a 2017-18 Dancing While Black top 10 choreographic finalists. Gibney granted Mr. Washington a evening length show in 2019. Currently Maleek is honored to be nominated for a 2021 Bessie Award for “Outstanding Breakout Choreographer”.
PREVIOUS WORKSHOPS 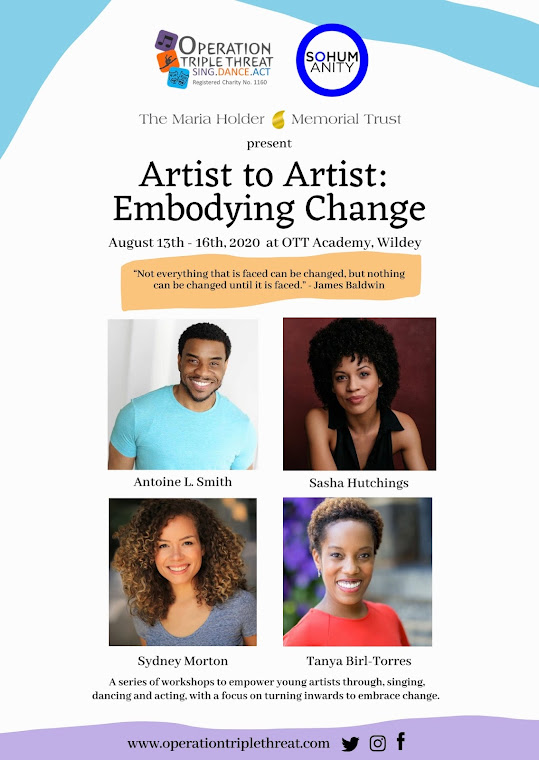