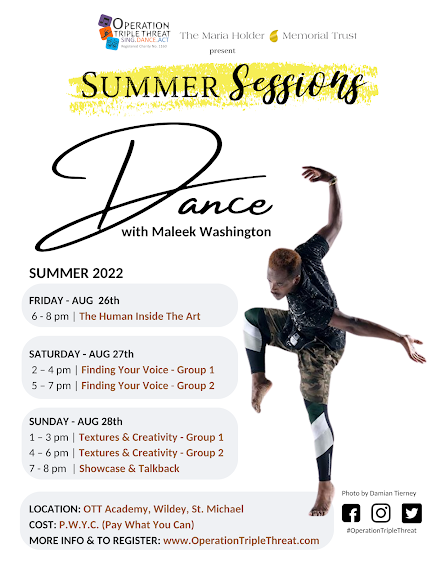 Click on photo to zoom in
MORE ABOUT THE WORKSHOPS
-The Human Inside the Art: Finding what makes you unique as a person, as a dancer.
- Finding Your Voice:  Whisper, yell, sing! How do you tell YOUR story?
- Textures & Creativity:  Creating Choreography
- The Showcase: The showcase will be presented for family, friends and industry professionals to showcase the work accomplished and discoveries made during the workshops.
-The Talkback - An opportunity to have a conversation with Maleek Washington and ask him anything you would like about dance, the performing arts industry etc.
WORKSHOP REGISTRATION
Click here: 2022 Summer Sessions Registration Form
MORE ABOUT MALEEK WASHINGTON
MALEEK WASHINGTON is from the Bronx, New York. An alumni of the Boston Conservatory, where he studied on full scholarship, he began his dance training at Harlem School of the Arts, ‪Broadway Dance Center‬, and LaGuardia High School for the Performing Arts. He has danced with CityDance Ensemble (Washington DC), Montreal’s SpringBoard Danse (working with Jose Navas & RUBBERBAND), and Kyle Abraham’s A.I.M for four seasons, before becoming the first African-American male to perform in Sleep No More. He has also performed for celebrity artists Sia, ‪Phish‬, and ‪Rihanna‬, and ASAP Rocky. Maleek was part of NBC’s Jesus Christ Superstar Live and performed with Camille A. Brown and Dancers in the 2018 Ted Talk Conference in Vancouver. Maleek has been a member of Camille A. Brown and Dancers for 7 seasons.
Maleek's choreographic portfolio highlights include, assistant choreographer for Camille A. Brown's Grammy-winning "Porgy and Bess" and “Fire Shut Up In My Bones" at the Metropolitan Opera, making history as the first Opera composed by an African American man named Terrance Blanchard; and associate choreographer to Camille A. Brown's "For Colored Girls." Other notable choreographic credits include, Camille A. Brown's Alvin Ailey American Dance Theater piece entitled "City of Rain," Rashaad Newsome's "Assembly" at Park Avenue Armory, rapper Nas' "Master Class" music video, Spike Lee's Mont Blanc Commerical, and MOVE|NYC|'s Scottish Youth Exchange collaborative work that premiered at the U.Dance Festival in England.

Proudly, in 2021, Maleek was named a New York Live Arts Fresh Track grantee and was also nominated for a Bessie as an “Outstanding Breakout Choreographer."
MALEEK's TEACHING STYLE

Maleek's classes delve into the dancer of today, re-educating the body to enhance our human aspects and creating an atmosphere to be versatile in any given style. Maleek's movement and combinations range from improvisation to contemporary fusing aspects from modern dance with a hip hop flare and learning how to tell a vivid story with your body. The classes includes a range of structured formatted movement, improvisation, floor work and dynamics centred around making strong movement choices. Maleek leads classes into an investigation of our individual qualities by integrating acting skills to help dive deeper into a sense of self and to create well-rounded performers and artists. 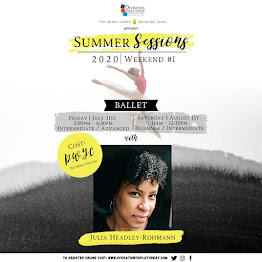 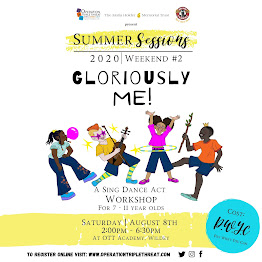 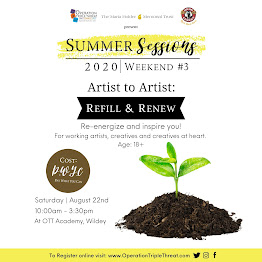 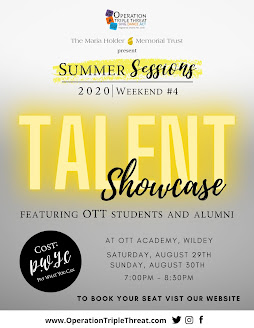